Rachel, Emma and I flew from Gatwick to Vancouver with Thomas Cook (£345 return) on Saturday October 8th. Arriving in Vancouver late on Saturday afternoon, we caught a taxi into central Vancouver, where we stayed the YWCA on Beatty Street for three nights. The YWCA was very modern and comfortable and just a short walk from the city centre. 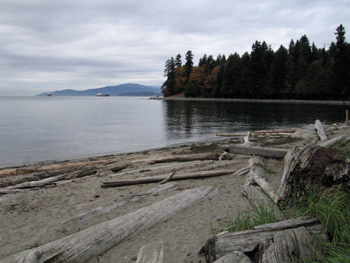 Sunday and Monday started with walks across Vancouver’s compact city centre into the 700 ha Stanley Park, a mixture of mature native woodland, small freshwater lakes and seafront footpaths. The park was a fantastic introduction to west coast wildlife. A family of racoons were eating bread on one of the footpaths, which also gave us a great views of Bald Eagle, Pelagic Cormorant, Double-crested Cormorant, North-western Crow, Varied Thrush, American Robin, Brown Creeper, Golden-crowned Kinglet, Bushtit, Steller’s Jayand Lesser Scaupgracing the open water and wooded fringes of the Lost Lagoon.

The waterfront footpaths that ring the park gave great views out into the open waters of English Bay. Groups of American Wigeon, Surf Scoter, Western Grebe and Ring-billed Gull were obvious right across the Bay. Being able to watch beautifully smart drake Surf Scoter in the lee of passing container ships against a mountainous backdrop was fantastically atmospheric.

There was a lack of passerines in the park’s woodland, with groups of some of the species above appearing to be the last of the millions of birds that head south, down the west coast, to temperate wintering grounds. The sumptuous variety of breeding and passage species illustrated at the Park’s Nature Centre made the paucity of the woodland birds present during our stay stark. This quietness continued in all the woodland we visiting during our holiday.

Vancouver was great fun, with a real range of cultural influences making sure both food and entertainment were plentiful and varied. 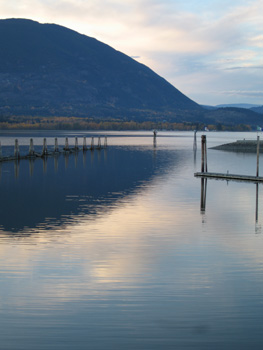 On the morning of Tuesday 11th, we picked up a hire car (Budget – £170 for 11 days in a full size 4 door auto with air con) and headed east onto Highway 1 towards the Rockies. After picking up lunch at Silver Creek, we sat by a small tumbling river just outside the town to eat. A family of noisy and approachable American Dipperjoined us on the river, along with a group of Common Mergansers. Slowly appreciating the smell of rotting fish, we eventually realised the entire river channel was full of thousands of salmon, many of which appeared to be spawning and then dying on the edge of a gravel bank at one side of the river. The urgency of the fish, coupled with the smell and brooding mountain view made this an unforgettable lunch break.

By the end of the day we reached Salmon Arm, after travelling around 450 kilometres. This small town lies at the southern end of one of the arms of the Shuswap Lake Provincial Marine Park. After quickly booking into the Best Western Motel, we headed down to the lakeshore to catch the last hour of light. It offered a wonderful view down the lake, surrounded by lightly snow-dusted mountains. The marsh, reedbed and open water at the southern end of the lake was full of birds. Poor light and eclipse plumage exposed my woeful duck ID skills, but Green-winged Teal, Northern Shoveler, Horned Grebe, Pied-billed Grebe, American Wigeon, Pintail and Canada Geese all abounded. Northern Harriers, Merlin and Bald Eagle all added to the theatre by chasing the ducks and roosting starlings. As the last of the light faded into a spectacular sunset, we watched dozens of Red-winged Blackbird and Brewer’s Blackbird noisily roosting in lakeside willow adjacent to the bright lights of the lakeshore jetty. 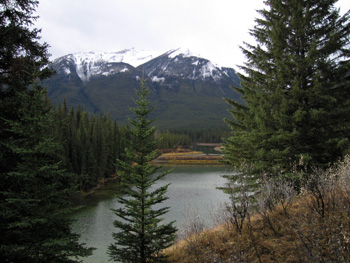 Starting early on the 12th, we completed our journey up to the Rockies, arriving in Lake Louise in early afternoon. Lake Louise township is a small collection of houses, hotels and tourist shops sprawling through the forest. It had no obvious character or identity. We found a warm bed for the night at the HI Lake Louise Hostel.

Leaving the town, we drove up to the lake after which the town is named. This is a real tourist honey pot, with several coach parties rambling across the lake shore. Leaving the lake, we walked up a footpath onto the ridge above the lake. This gave us a great view down into the emerald depths of the lake and surrounding high peaks. Snow was falling, producing a quiet, still atmosphere in the forest. The quiet was occasionally interrupted by bird noise. Ravens honked overhead and both Gray Jays and Clark’s Nutcracker sat around the car parks, begging for food. 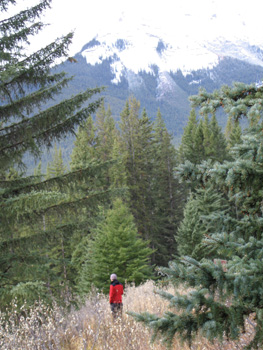 The next morning we drove 40 km south down the Bow Parkway to Banff. A couple of short stops along the road gave good views of a stag Elk and a dapper group of Hooded Mergansers fishing. After finding some accommodation in Banff, we walked south through the town to the Bow River, walking north up the river and around the Fenland loop walk. This short walk took us through wet aspen and spruce forest. After getting great views of Muskrat grazing on waterweed at the edge of the river, we then had similar views of Richardson’s Ground Squirrel and Red Squirrel in the forest. The intense cold eventually drove us indoors as the sun went down.

On the morning of the 14th, I wrapped up warm and walked up to Vermillion Lakes, a series of three shallow lakes just west of Banff. The road was deserted and gave good views across the lakes and surrounding fen and scrub. Several parties of Hooded Merganser actively fished and small numbers of American Wigeon, Common Merganser and Green-winged Teal were present on all the lakes. I watched a Bald Eagle eating a fish in a lakeshore tree for 30 mins. The pristine white head of these birds really stands out when they perch in trees, making them easy to spot. While watching the eagle, a procession of birds passed through the trees around me. A mixed group of Mountain Chickadee and Black-capped Chickadee was followed by a Red-breasted Nuthatch. Ending the parade, a Downy Woodpecker nipped aspen fruit from branches just above my head. This ten-minute burst of activity was the best woodland bird experience of the holiday. 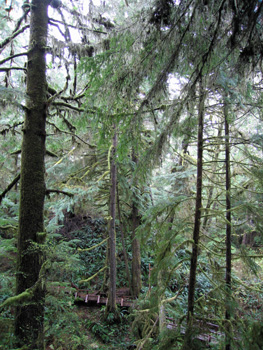 I returned to the hotel really tired after a long day out in the sub-zero temperatures. Rachel and Emma returned minutes later after a horse riding adventure that included an approach from a Grizzly Bear. This sighting really unsettled the instructor leading their trekking group as he had never seen a bear that close to Banff in early winter.

Another early start on the 15th saw us driving 5 miles north of Banff up Lake Minnewanka Scenic Drive. We parked in the Upper Banked car park and then headed up the C-level Cirque Trail. This 6 mile walk winds slowly up the eastern side of Cascade Mountain, ending at the moraine field at 2000 metres, still 1000 metres below the summit ridge. This was a beautiful and easy walk, with no other people on the trail up through the spruce forest. Gray Jays and a male Spruce Grouse (tail marking confirmed bird as “ Franklin’s Grouse” subspecies) fed confidingly by the trail. We were hoping to see marmots and picas at the top of the trail but it appeared that both species had already begun winter hibernation as nothing was seen or heard. Driving back into Banff late in the afternoon, detours via Johnson Lake and Tunnel Mountain road were rewarded with road-side encounters with Big-horn Sheep and rutting Elk.

Despite the great size and scenic beauty of the landscape, we were all glad to head back west after four days in the Rockies. The bitter cold and closure of many of the roads and trails for the winter made it difficult to really experience the wilderness of the Rockies. 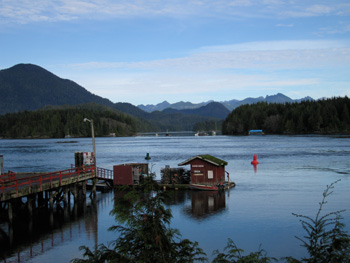 Another two days travelling back west eventually saw us arrive in Tofino on the western coast of Vancouver Island. Tofino is small resort on the edge of the Pacific Rim National Park. The town was packing up for the winter, with many bed and breakfasts and hotels closed. We were delighted by this, as it made this normally busy resort a relaxing and restful place to be. We stayed four nights in the Mini Motel at Crab Dock, a ten minutes walk from Tofino. From the motel room we regularly saw Belted Kingfisher perched on a spruce tree at the side of our balcony. The bird was so confiding I was able to take a reasonable digital shot through my binoculars. 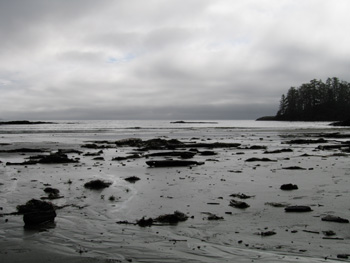 The highlight of our stay was an afternoon whale watching trip with Adventures Pacific. In a small zodiac, we were whisked out along the island’s Pacific coast. A calm, clear afternoon produced great views of seven Gray Whales, two Sea Otters and a colony of Stellar’s Sealions. I was just as excited by the close views we got of Surf Scoter, Black Scoter, White-winged Scoter, Common Loon, Arctic Loon, Yellow-billed Loon, Red-throated Loon, Common Murre and Pigeon Guillemot. The three hours we spent out on the water passed in the blink of an eye and left us all wanting more. Fantastic!

We spent another two days of meandering along the many trails along the rugged coast south of Tofino. Wrecks of giant kelp littered the beaches, providing shelter for groups of migrating Savannah Sparrows. Brooding stormy skies provided a stunning canvas for skeins of Snow Geese and Tundra Swans flying south for the winter. Small groups of Surfbirds and Black Turnstone whizzed along the coast following the rise and fall of the tide. Patience also produced a drake Harlequin Duck flying offshore. This was my holiday wildlife highlight, after years of hoping to see this bird that breeds and winters in two different but extreme places.

An early winter trip to western Canada is not the way to produce big bird hauls. However, it did afford us amazing glimpses into the lives of some fantastic high mountain and marine wildlife. The trip was amazingly easy, with accommodation easy to find, without pre-booking and roads throughout our 2400km trip were relatively quiet. We all really enjoyed having fun in the great Canadian outdoors!