This was our first visit to Lanzarote and was undertaken with my son and family including grandchildren aged four and six so you will understand that this was in no way a ‘birding’ holiday. I have included information that may be of interest to the whole family as well as the birder hoping to seek out the local specialities. Our base for the week was the Blue Bay Hotel in Costa Teguise, which is on the east coast about five miles from the capital Arrecife. The hotel was an all-inclusive type which catered for children with suitable swimming pools, buffet food and children’s discos and shows every night. The holiday was booked through Thomas Cook and cost around £550 each including flights and transfers. Weather on our trip was hotter than expected at around 80–85°F every day. Buses into Costa Teguise centre and Arrecife were frequent and inexpensive and taxis were cheap with standard tariffs to most destinations. 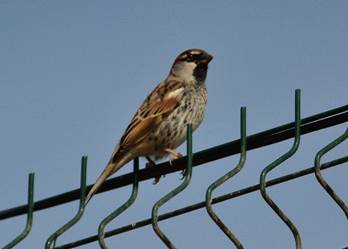 At the northern end of the town at the Charcos beach there is a (dried up) riverbed that retains some moisture and greenery, walking up it a short distance we found a Spotted Flycatcher, Hoopoe, Stonechat and a single Spanish Sparrow. Continuing past Charcos beach along the coast you exit the town and the terrain becomes relatively unspoilt rocky plains and a few dried bushes. This area looked ideal for Stone Curlew and Cream Coloured Courser although none were seen. One Kestrel and two Berthelot’s Pipits were seen on the cliffs and two Sandwich Terns were offshore, a Little Egret worked his way along the rock pools. Barbary Partridge droppings were in several locations in this area but none were spotted.

Walking along the promenade in the opposite direction towards Arrecife eventually you come to a point where you have to walk inland around a private estate and a heliport. Here there are a few trees with berries and low level bushes which held a Spotted Flycatcher, Single shy Robin (?) a Hoopoe, Berthelot’s Pipit and two Great Grey Shrikes. A pair of confiding Cattle Egrets frequented the Palm Tree Garden opposite our hotel most mornings. 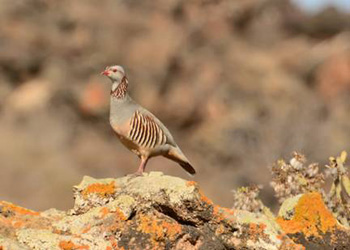 The golf course is about two miles uphill straight ahead of the Blue Bay Hotel and is best reached by taxi (4 euros) and either walking back down the hill or taxi return. Access was pleasantly given by the ladies on reception and I made sure I did not get in any golfers way! Unlike the golf course in Fuerteventura (Costa Caleta) there were no pools here but it was very green through being watered. Very close to the clubhouse were six Barbary Partridges, Berthelot’s Pipit and Great Grey Shrikes as usual were seen and a Kestrel was spotted pulling a lobworm out of the fairway! A small number of Pallid Swifts (lifer) were hawking insects around a group of trees and I was surprised to encounter a dozen or so Redwing in the car park trees at the entrance.  I spent over two hours on the course without seeing that much, I would imagine that when full migration is under way much more would be seen. 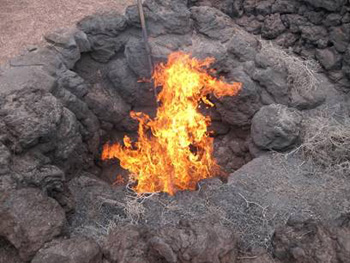 This is the capital of Lanzarote and is a short bus ride from Costa Teguise costing around three euros return. The coast here is made up of long sandy beaches and low lying rock pools and all the birds seen in Costa Teguise were seen with the addition of Kentish Plover and Sanderling. One point of note is that in places here the birds have become habitualised and are quite confiding, ideal for taking pictures, not however Sanderling and Kentish Plover!

Painted Lady butterflies were common throughout, Large and Small Whites were seen in various locations although my Collins guide states they are not common. A few Red Admirals were seen, particularly on the golf course. African Grass Blue (a very small butterfly about the size of a housefly) were only seen on one location in the dried up riverbed in Costa Teguise. Monarchs were seen by the rest of the family on a day out at Rancho Texas Park. Several Red-veined Darter dragonflies were seen near the heliport in Costa Teguise, this was really surprising as nowhere did we see any ponds to support lavae. 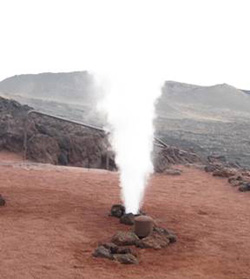 Two miles up the hill from our hotel was a large water park which we were advised is really more suitable for older children and adults. One good guided trip that the whole family went on was the Timanfaya National Park, where the volcanic activity on the island last occurred. Demonstrations are given here, where the temperature reaches 300 degrees Centigrade two metres down. Another demonstration showed the effect of pouring water 12 metres down a volcanic hole with a temperature of 600 degrees Centigrade. The grandchildren and their parents also had a good day out at the Rancho Texas Park which had a children’s water park, zoo, shows and other attractions.

From a purely bird watching perspective Fuerteventura at this time of the year probably has more of interest, but from a family holiday perspective Lanzarote offers more in the way of interesting family days out.