Namibia is a very large country in south west Africa; the capital is Windhoek a very modern city. The population of the country is mainly centred around the few main towns and numbers about 2 million. It is a multi-cultural society and seems very safe for visitors.

The trip was organised by Naturetrek of Cheriton in Hampshire and the dates were from 20th to 29th January 2006.

The ID Guide I chose was Sasol Birds of Southern Africa by Sinclair, Hockey and Tarboton ISBN:1868727211.

Visas are not required for entry to Namibia. Currency is the Namibian dollar but South African Rands are equally acceptable. Currently the exchange rate is around 10 dollars or Rands to the £. At this point I should mention that meals are not included in the cost of the holiday.

At this time of the year it is summer locally and this means very high temperatures with occasional heavy rain; which never lasted long during my trip.

I flew to Gatwick from Glasgow arriving at 15.20 hours. I then had to wait until 20.45 hours to board the Air Namibia flight to Windhoek which left on time at 21.30 hours. The plane was a wide-bodied jet and the service was good; with free drinks and a choice of food.

Arriving in Windhoek airport at 08.45 hours, we quickly cleared the usual formalities and I wasted no time in getting out into the fresh air. The guide had not arrived and myself and the other birders spent our time watching the multitude of hirundines that were flying around the airport buildings. When our guide arrived he turned out to be of Bushman extraction. He went by the name of Charles Rhyn and was very pleasant. 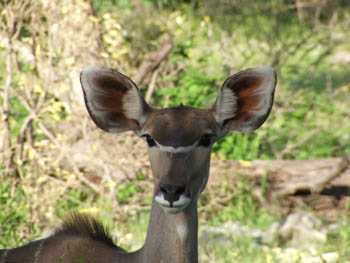 He turned out to be very knowledgeable about all aspects of Namibian wildlife. His English was good but I had some difficulty in understanding him, but that was not his fault since my hearing is bad. Our Transport was a Toyota minibus complete with trailer for the luggage. With seven seats in the back and one beside the driver it was a bit of a squeeze for the eight birders who made up the party. The vehicle had a ‘pop-up’ roof which could only be used when we were off the main roads.

We set off on the 5 hour run to our first night’s stop at the Waterberg Plateau Park rest camp. On the way we stopped at a SPAR market to get some food for our lunch. Along the main roads there are picnic areas and we stopped at one of these for a bite to eat. As we progressed on our way we saw many birds; most of them briefly. A bird that was very evident on many telegraph poles and bushes was Southern Pale Chanting Goshawk. Rollers were also much in evidence. 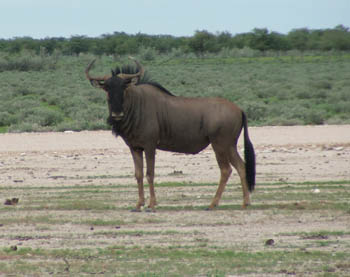 By mid-afternoon we were within sight of the Waterberg Plateau which is a red sandstone feature with sheer cliffs rising out of the plain for 200 metres. The plateau is a refuge for endangered species and is ‘off limits’ to the public. We spent our first night in chalets at the rest camp which is run by the government and had dinner in the camp restaurant. The standard of food was very high but I was too tired to eat much and went off to bed early; I fell asleep to the sound of lions roaring in the distance.

I awoke at 06.00 hours the following morning and went off with the rest of the party to explore the vegetation along the base of the cliffs. Rock Hyrax and Baboons were obvious and we saw some very rare birds; such as Hartlaub’s Francolin, Rockrunner, Violet-backed Starling and Verreaux’s Eagle. 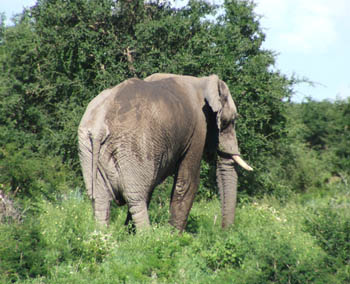 After breakfast we left Waterberg and headed north towards Etosha National Park, which is one of the worlds largest, covering an area of some 22,000 square kilometres. In the centre of the park is a gigantic salt pan, said to be about the size of Yorkshire; it is completely featureless but the veldt around it is full of wild animals and birds. Because we were there in the wet season water was plentiful and the usual waterholes were largely deserted. However there were plenty of animals about and some of them had newly born young. Springbok young were seen trying to perfect the skills of ‘pronking’ which is the practice of bouncing along on all fours in an effort to convince predators that they are too fit to be caught. Other animals were, Giraffe, Gemsbok, Impala, Greater Kudu, Blue Wildebeest, Red Hartebeest, Steenbok, Elephant, Lion, Leopard, Burchell’s Zebra, and the diminutive Dik Dik. 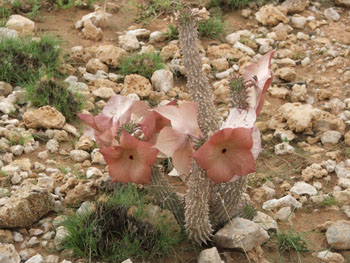 We stayed in the Etosha area for two days, covering all the game trails in an effort to see as many birds as possible but never stopped at any spot for very long. We had several sightings of Kori Bustard close at hand but had to be content with distant views of Secretary Bird and Blue Crane. Ostrich was another bird that kept its distance. Although the Greater Etosha Salt Pan was dry, a smaller pan (comparatively speaking) known as Little Etosha, held water and consequently many waders and water birds.

We turned south and headed for Omaruru; another long drive ensued, which was made longer by the constant brief stops whenever a likely bird was spotted. 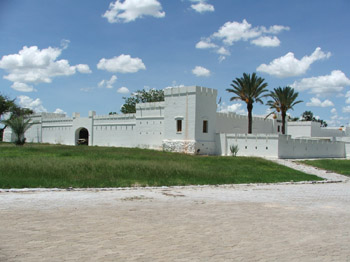 Stopping at the small town of Outjo to buy provisions, some of the party had trouble trying to use their credit cards to make a purchase. During a lunch break under a shady tree we were able to watch Red-footed Falcon catching flying insects and I was able to photograph a Steppe Buzzard dozing on a telegraph pole.

At Omaruru we stayed in lovely chalets and dined royally in the wonderful camp restaurant. After dinner I set out to look for nightjars and was able to find some but was unable to put a name to them. At the camp waterhole I watched a pair of Blacksmith Plover ‘see off’ any creature that dared to enter their territory. The following day we explored the game trails around the camp finding, Pearl-spotted Owlet, Groundscraper Thrush, Monteiro’s Hornbill and Grey Lourie, to name but a few.

We left Omaruru the next morning and set off to Walvis Bay on the Atlantic coast; passing through wonderfully wild sandy and gravel deserts with spectacular views of distant mountains. On the way we noted Long-billed Lark, Ruppell’s Korhaan, Tractrac Chat, Capped Wheatear and Long-billed Pipit.

Arriving in Walvis Bay, the cooler temperature was obvious and it was nice to catch a glimpse of the sea. Once settled in to our hotel (first of the trip), we had a quick look at the local sea birds and waders. I have never seen so many birds in one place, and I think it would take at least a week to do the place justice. There were thousands of terns of various sorts, some that were new to me; cormorants also of several types were in uncountable numbers. Curlew Sandpiper seemed to be everywhere along the beach together with Sanderling and Turnstone.

The following morning saw us on a pelagic trip some twenty miles out to sea. The conditions were calm and this probably accounted for the fact that we did not see any albatrosses; however, this was somewhat compensated for by good sightings of Subantarctic Skua, Pomarine Skua, White-chinned Petrel, Wilson’s Petrel and European Storm Petrel. 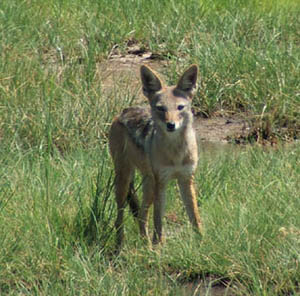 We saw a single Cape Gannet. A Blue Shark kept the boat company, no doubt enjoying the fish that was being thrown over the side to attract the birds. As we returned to shore we saw a solitary Jackass Penguin preening on the beach. Our guide was waiting at the jetty to whisk us away to visit the local salt pans where we saw incredibly pink Lesser Flamingos and, new for me, Chestnut-banded and White-breasted Plover. Our next stop of the day was a visit to the Namib Desert with it’s mountain-high sand dunes. We were there to look for Dune Larks. Rather like looking for a needle in a haystack but Charles managed to find one for us. On our way back to the hotel we were lucky enough to see a Grey-headed Gull.

Before leaving Walvis Bay to return to Windhoek we managed to find an Orange River White-eye just outside the hotel gates.

On our way back to the airport we just had time to visit some sewage works which were very productive, rendering up African Darter, Red Bishop, Cape Shoveler, Hottentot Teal, Red-billed Firefinch plus Diederik and Jacobin Cuckoos . 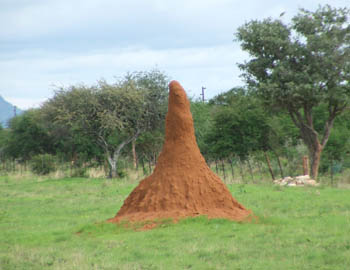 We arrived back at the airport in time to catch our flight back to Gatwick.

I ended up with a total of 256 identified birds. Had I been able to put a name to all of the birds that I saw, no doubt the final total would have been much greater; however, I am well satisfied with what I achieved. If I am lucky enough to return to Namibia, I shall endeavour to move at a much slower pace over a much longer period of time, in order to savour the wonders of the land that is Namibia. The names used in the Trip List are as laid down in Birds of Southern Africa (Third Edition – 2002) by Sinclair, Hockey & Tarboton.