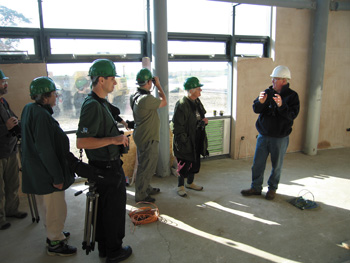 Guests met up for a pre-dinner dink and briefing at Headlam Hall Country House Hotel. A hearty dinner (including roast pigeon for a brave few) set us up well for the weekend. The beautiful sunset encouraged further positive thoughts although the forecast light west winds did little to raise hopes of significant seabird or passerine migrant movements.

Waking to a cloudless blue sky, we headed east in the minibus to the RSPB’s Saltholme Reserve. Although the reserve does not open until January 2009, we were given wonderful sneak preview tour of the reserve by David Braithwaite (the site manager) and Toby (warden).

Hard hats in place, the group headed first into the amazing architecture of the visitor centre, amid a steady flow of contractors hammering, gluing and sticking the internal finishes of the building. Built on two levels, the centre will clearly offer visitors a level of comfort, wildlife information, fun and retail therapy seen on no other reserve in northern England. A very happy half hour was spent looking through the full height glazed wall that give stunning views right across this 400 hectare reserve and beyond to the industrial landscape of Middlesborough docks and rising hills of the North York Moors. These first glimpses of birds from the visitor centre encouraged us to move outside, as David and Toby explained the main elements of habitat management. Leaving the visitor centre, a bobbing Wheatear jauntily encouraged us onto the network of paths around the reserve. 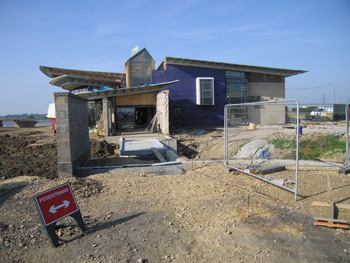 As we walked down towards Saltholme Pools, small groups of Golden Plover wheeled over us singing. This gentle serenade quickly changed into alarm as a Peregrine flew over panicking hundreds of Lapwing, other waders and ducks from the flooded fields around us. Geese were also slowly revealed as we neared the first hide, with two Bar-headed Geese, a Barnacle Goose and around 20 Pink-footed Geese mingling with the other resident geese.

Once inside the hide, David and Toby helped us all pick up Spotted Redshank, Shoveller, Teal, Wigeon and Little Egret. Reed Bunting and Stonechat calls from pathside hawthorns and thistles helped to spur us on again, visiting two more hides during the morning, bringing us closer to the geese and helping us get close to a feeding Snipe. Huge thought has been given to the hide design, with several styles of viewing and seating available. As lunchtime neared, a stream of corvids overhead alerted us to a passing Osprey, lazily wandering south-west towards the coast.

A truly memorable morning left us all promising to return (with friends and family) once the reserve opens in the New Year. Enormous thanks to the RSPB for allowing us to enjoy the reserve now and to David and Toby in particular for sharing their warmth, enthusiasm and birding knowledge. 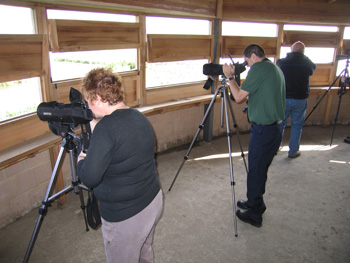 After lunch, we drove two miles east to Teesmouth National Nature Reserve. The reserve has two hides set amongst the mud flats, saltmarsh and saline lagoons of the lower Tees Estuary. The tide was rising, forcing many birds up onto the marsh. Scanning through the roosting birds, Redshank and a Black-tailed Godwit were picked out and Shelduck, Red-breasted Merganser and Great-crested Grebe slowly identified at a distance.

We ended the afternoon watching the common seals in the setting sun, while skeins of Pink-footed Geese called as they came in off the North Sea.

A murky morning cleared as we headed east again to Hartlepool Headland, a small promontory at the north end of the town. One of the best migrant and seawatching hotspots in the region, the Headland is always worth a visit during spring and autumn migration. Arriving on the Headland, we quickly spotted a few members of Teesmouth Bird Club, who helpfully filled us in with the few morning sightings. Over the rest of the morning we walked the seaward promenade as the tide rose. Turnstone and Grey Plover picking through the seaweed-covered rocks were slowly replaced by Eiders, a preening Common Scoter, Red-throated Diver and Cormorant. 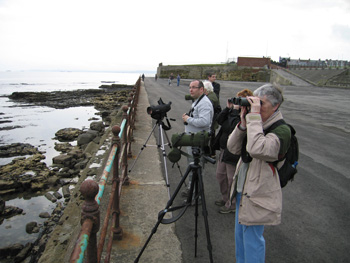 More friendly guidance saw us heading to the “Chip Shop Trees” at lunchtime, entertained by begging Herring Gulls and challenged by a feeding party of Goldcrest and single Yellow-browed Warbler in the trees above us. The constant stream of high altitude Pink-feet skeins continued

Leaving the Headland behind, we called in again at Saltholme Pools, catching up with a pair of elegant Pintail that we struggled to see the day before. Our final birding challenge of the weekend was at Cowpen Bewley Country Park. The afternoon sun still had some warmth in it, encouraging dragonflies to dance across the Park’s wetlands. Two “falcons” came into view, allowing us to separate Kestrel and a hungry Hobby which enthralled us with several successful dives catching and eating dragonflies on the wing. What a great end to the weekend!

Kath commented “it was great not to be driving and to visit to many interesting sites”.

Steve and Chris said they’d had “a great weekend”.