The holiday commenced on the 9th of October from Birmingham Airport, on First Choice flight FCA 259C at 08.05am. The Holiday was booked through Villa Select Ltd who arranged the accommodation, flights, and car hire. We were accompanied by our daughter, son-in-law and grandson.

Total cost of the holiday was £2378:90. This included staying 14 nights self catering at the 5* premier villa, Casa Dionisio.

Our intention was to visit Portugal during peak autumn migration.

Additional up to date information was supplied by David & Amanda Mason www.realbirder.com 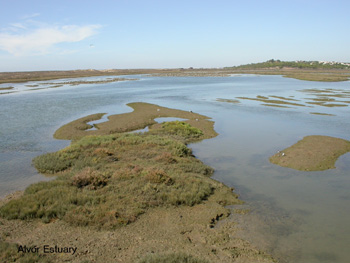 Although we have birded in Portugal previously this was our first time on the Algarve . The Field Guides used were several years old and with the continued development of the Algarve we suspected that we would have problems finding our way around.

This could not have been further from the truth, whether it was luck we know not, but following the above guides we found all the sites first time with the exception of Pera Marsh, whose entrance was obscured by major road works. A feat we have never managed before.

The weather in the main was dry and warm. Several storms did occur during our trip but these were restricted to a couple of evenings and had no effect on our birding. As the Algarve is situated on the Atlantic coast it came as no surprise that we had a constant breeze which varied in strength daily.

The trip was designed so that we would have family breakfasts where possible, returning late afternoon in order to spend some time with the family. This meant that the trip was far from a thrash, especially if the amount of time spent at Pera talking to other birders is taken into account. The total number of bird species seen was 123, easily obtainable by leisurely visiting the recognised birding sites. 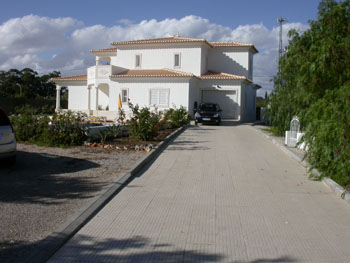 Villa Casa Dionisio was situated to the east of Albufeira at Olhos D’Agua and was within 1.5 hrs drive of all the recognised birding sites. I suppose it would be fair to say that the whole sprawl that is Albufeira is not a place we would rush to return too, although the rest of the family found the local beaches great and also utilised the variety of local restaurants and family orientated attractions.

The villa had extensive grounds and was adjacent to citrus orchards and a smallholding, making it attractive to many of the local birds. Our garden list included Sardinian Warbler, Serin, Azure-winged Magpie, Waxbill, Crested Lark, Fan-tailed Warbler, Chiffchaff, Little Owl, Spotless Starling and Kestrel, as well as the normal garden species you would expect to find.

Our thanks go to many of the resident birders who were happy to furnish us with recent bird sighting information, security aspects and little known birding spots. 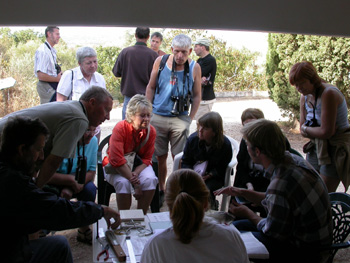 A special thanks to Dr Colin Key for his information on the construction of the golfing complex at Morgardo de Reguengo, where two new lakes have been created providing a habitat where a few rarities have recently occurred.

We would also like to thank all the staff at the A Rocha ringing station at Alvor for their very warm welcome, the free coffee and cake and the patience and thoroughness they showed when explaining all the environmental research work they undertake on and around the western Alvor marshes. Special thanks to Will & Rachel Simonson, Ruben Heleno and Isabel Soares.

This project is part funded through voluntary donation, so if you visit please donate. The centre is only open Thursdays from 10:00am . A comprehensive annual report into the eco-system of the Alvor marshes can be purchased.

SITES VISITED NOT IN THE BIRD GUIDES

Can be found by approaching Armacao de Pera from Pera Marsh. Over the new roundabout to the T junction turn left. As you enter Armacao de Pera take first major left and left again where road bears left. At roundabout on the seafront turn left to the end & lagoon is on the left. (Good for Terns, Gulls & waterfowl)

From Lagos heading west on N125, turn left towards Salema shortly after the town of Budens & water treatment works are 150 metres on the right. View the lagoons from around the perimeter fence. Our visit produced Green Sandpipers, Cattle Egrets, B.W. Stilts and various wagtails. 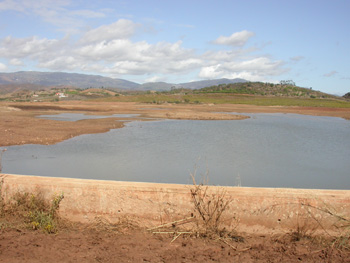 From Portimao take the N124 north, signed Monchique. Within a couple of kilometres of passing the motorway is a left turn signed Reguengo and a Golf sign. Follow the golf signs which will take you to a dam with a lake on your right. 200 metres on is the clubhouse, turn right here and follow this track which will bring you to a second lake. This was still filling when we visited. Our visit produced various ducks, 16 Spoonbills, 7 Flamingos, Cattle & Little Egret. Lunch at the Clubhouse was excellent and very good value; 1 club sandwich, 1 fillet of fish with all the trimmings, 1 pudding & 2 large coffees in large bone china cups all for the princely sum of 19 euros.

As previously stated we had intended to be in the Algarve during the height of the migration. We are aware that autumn migration is far more difficult to predict than spring, so we looked through birding reports to determine the optimum time.

As it happened the weather in northern Portugal and Southern France was so bad that it was probably affecting migration. Many opinions were given from “the birds were being held up in the Pyrenees” to “the birds were not stopping and going straight through Portugal.” In reality nobody knew; it was just one of those years, with raptor passage in particular being very disappointing.