Our trip this year was a week earlier than last year and produced a good number of different birds and we visited four new locations. I have included directions to these; other location directions can be found on my previous reports on the Real Birder website.

Our hotel as usual was the Pioneer Beach (superb) and booked as a half board package for around £950 each. Car hire for twelve days was through SIXT and cost was around £17 per day with no excess for a new Megane.

Prior to our trip there had been plenty of rain in Cyprus so rivers that were dry last year were now flowing. The weather on our trip was in the 60°-70°F bracket and the sun worshippers around the pool were able to use loungers on about five days. 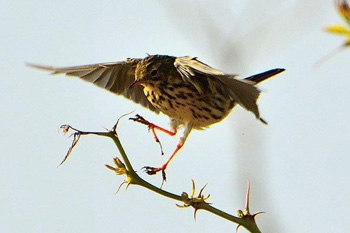 About two years ago the natural scrub of the headland was ploughed in and a crop of Barley planted; this has now been abandoned and natural vegetation is taking over again, alas of course not the original scrubland but it is providing a good habitat for a wide selection of birds not seen by me here before. On the opposite side to the headland from Pioneer Beach on the fringes of the next hotel are some taller trees and bushes which held three Cretzschmar’s Bunting, two Sardinian Warbler, two Chiffchaf, two Blackcap and two Meadow Pipit. Also seen on the headland were sixty Greenfinch (just in off the sea), two Serin, one Hoopoe, one Tawny Pipit, one Sparrowhawk, twenty Corn Bunting, six Northern Wheatear, two Isabelline Wheatear, one Alpine Swift, ten Barn Swallow, four House Martin, two Fan-tailed Warbler, one Kingfisher, three Stonechat, seventy six migrating Cormorant at high level, ten House Sparrow, two Collard Dove, one Kestrel, one Lesser Whitethroat, six White Wagtail, four Magpie, six Hooded Crow, ten Crested Lark, six Feral Pigeon, one Black Redstart and a Common Sandpiper.

This new site is on the left hand side of the gravel track overlooked by the mast (for directions see March 2014 report); it is made up of large piles of dung from a nearby farm. Birds seen here were a flock of eighty Serin, one Black-eared Wheatear, four Red-throated Pipit, one Cyprus Warbler, one Chukar and one Isabelline Wheatear.

For directions see March 2014 report.  Birds seen here were ten Chukar, three Ruppell’s Warbler, two Subalpine Warbler, one Whitethroat, one Cyprus Wheatear and one Eastern Black-eared Wheatear. As we sat having a break at the dam this little bird popped out of a bush ten metres away and landed next to us feeding contentedly, these Ruppell’s pictures are not even cropped. 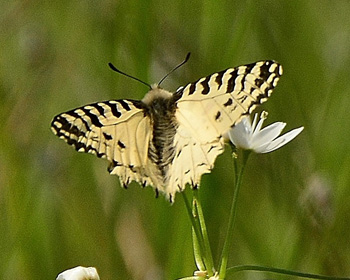 This site was very good for butterflies with many Swallowtail, Orange Tip, Blues, Large Wall Browns and a few Eastern Festoons which was a first for us.

Birds seen here were one Alpine Swift and one Red–rumped Swallow.

We had intended to walk to Foinikas Village (see March 2014 report) but the river was too deep near the village so we waded across higher up using our ultra lightweight wellington boots and walked up a track between the hills opposite. Birds seen were one Hen harrier (m), one Long-legged Buzzard, two Greater Spotted Cuckoo and one Eastern Bonelli’s Warbler (lifer). The Long-legged Buzzard initially flew over our heads at medium height over the hill into the next valley, it then started to soar to a great height until it was only visible through binoculars, we were then astonished to see it close its wings and drop at fantastic speed to the ground. I have seen Peregrines do this and this seemed at least as fast, it then came over our valley where I took this shot.

This year the river was in full flow but no Herons were seen. Birds seen were five Hawfinch, one Buzzard, one Black Frankolin, ten Cetti’s Warbler, one Willow Warbler, five Black-winged Stilt and one Moorhen.

This site was visited early (7th) during our holiday as we hoped to see Finsch’s Wheatear which is known to overwinter in a few areas in Cyprus. We were very fortunate and found one individual; in discussion with a local birder later he mentioned that where we had seen the bird is one of the usual haunts, so I have given precise directions below. Take the B6 out of Paphos, turn left onto the E606 and 2.3 km past the motorway bridge turn right onto a track and immediately turn left. Follow this track on a winding route until a crossroads with some massive rocks, turn left and after a short distance you will reach a large flat area to your right. Park here and walk towards the slope ahead; the farm buildings will be on your left and the Finsch’s were seen on the scree straight ahead. Be warned they are very shy!  Also seen here were three Blue Rock Thrush, five Kestrel and one Greater Spotted Cuckoo.

This walk is about six miles long and takes around three hours; we park at Coral Bay and get the local bus to Agios Georgious and walk back. Birds seen were fifty Jackdaw, one Hoopoe, one Yellow-legged Gull, seventy migrating Cormorant, one Black Frankolin, two Sand Martin, two Wood Pigeon, one Blue Rock Thrush and twenty Spanish Sparrow.

To get to this site take the B6 from Paphos to Limassol and follow the signs to Ladies Mile on the edge of Limassol. There is a hide overlooking a marsh on the right and further along on the road are some gravel pits. Seen here were three Green Sandpiper, three Little Ringed Plover, eight Black Winged Stilt and one Moorhen.

This new site is reached by taking the E709 road from Paphos, turning right at Kathikas and parking by the church in Kato Acourdaleia. 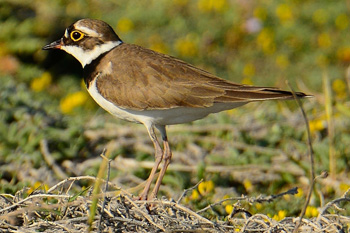 Walk back up the hill 100 yards and take the path signposted to the right, this path continues past a left fork to finish at Pano Acourdaleia. We finished the walk by returning to the car along the road which has few cars. This area has lovely countryside with great views and a nice coffee shop in Pano Acourdaleia. Birds seen were one Long-legged Buzzard, one Hoopoe, one Corn Bunting, two Linnet and six Rock Dove on the rock face below; these birds appear pure. Apparently later in the year this area is good for shrikes, buntings, Rollers and flycatchers.

For some reason this area appears very good for Marsh Harrier; on our visit three were seen over the farmland. Also seen were two Hoopoe, three Swift and ten Chukar.

Travelling from Paphos towards Limassol on the B6 road, on reaching the main garrison complex look out for a bus stop/lay-by ahead and turn right down a track just before the bus stop. Drive as far as possible, park and continue the short distance to the cliffs on foot. Star birds here are the Griffon Vulture which nest on the cliffs, what a fabulous display these six birds put on for us. The easiest way to describe it is that it was like being at a Red Arrows display; they started off in a complete circle then glided into a straight line with one slightly underneath the one on front, then they broke off in pairs and did some “formation” flying. This went on for around twenty minutes and then they disappeared to the cliffs only to reappear a few minutes later. My favourite moment was when a Hooded Crow tweaked one of the Vulture’s tail in mid flight. The timing of our visit was around 2 pm and I suspect they return to the cliffs from their feeding station most days around this time. Also seen here were one Cyprus Wheatear and three Alpine Swift. 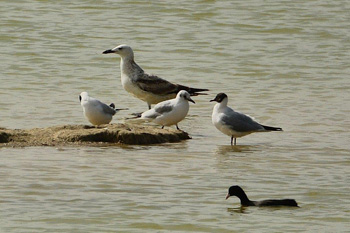 Walking along the coast were seen one Hoopoe, one Steppe Buzzard, one Marsh Harrier, one Ruppell’s Warbler and one Grey Heron.

In the ruins there were two Hoopoe, four Blue Rock Thrush and one Tawny Pipit.

This area is reached by taking the B6 from Paphos towards Limassol, turning left at Kouklia on the 616 route and following the winding, hilly route to the village.  Seen here strangely were the only Blackbird and Robin of our whole trip; also seen were a tiny Chiffchaff, three Serin, one Cyprus Wheatear and two Sardinian Warbler.

We were lucky to enjoy some really outstanding wildlife moments and new locations on this holiday which made it one of our best ever in Cyprus. Many thanks to Colin Richardson for his invaluable help and patience with ID’s.