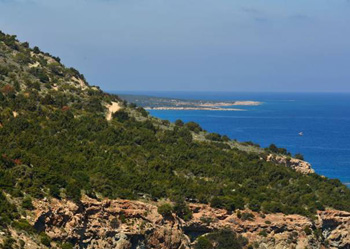 This report follows last April’s where as you will see a different mix of birds were seen. The holiday was again booked through Thomsons and The Pioneer Beach was our hotel. If you have not been to this hotel then you should give it a go as it is really superb. Cost for half board, including flights and transfers, was £800 each from Gatwick. One really important point to note is that we pre-booked our hire car though the Thomsons web site and it cost £110 for 11 days with no excess, we were given a free upgrade by “Sixt Cyprus”, the hire car company, to a Skoda Octavia with 13,000 km on the clock; again their service was excellent and recommended. The first seven sites mentioned are new and where necessary, directions are given. Free maps of the Paphos region can be obtained form the very helpful and efficient ladies at the hotel reception desk. BirdLife Cyprus is the site to visit for up to date sightings and general site information. Temperatures during our visit were generally in the 65° – 70°F region with one cold day and one night of rain. One very important point to is that Cyprus had obviously had little rain over winter, so the local reservoirs were up to 20 ft lower and many of the small rivers had run dry. This meant that places that were very productive last year for waders and herons had none this year. 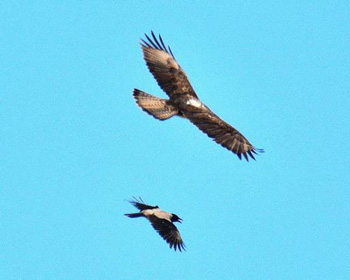 This new site consists of a large radio mast enclosed in a fenced compound abut 300 metres square with unspoilt scrub predominant, some also existing outside the fence. The site can be reached by walking from the Aspro Dam wall from where it can be seen in the distance on the left, or by car through Anarita on the F622 and on exiting the village taking the first fork to the right and when the road takes a sharp turn to the right carry straight on down a gravel track and the mast is on the left. Birds seen here and the adjacent fields were six Cretzchmar’s Bunting, ten Red-Rumped Swallow, fifty Barn Swallow, twenty House Martin, four Serin, two Meadow Pipit, thirty Corn Bunting, two Chukar, ten Northern Wheatear, one Black-eared Wheatear, one hundred Spanish Sparrow, two Spectacled Warbler, three Red Throated Pipit (lifer), one flyover male pale Harrier seen was a probable Montagu’s as one was found later by others in the area. 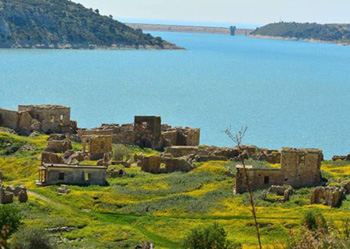 This site is reached from the Paphos – Coral Bay road (E701) taking the signed road to the right just before reaching Coral Bay. Carry on up this narrow road for about one kilometre and park where the road is blocked off and walk the short distance to the dam. Birds seen here were: Bonelli’s Eagle (lifer) two Greater Spotted Cuckoo being chased by Magpies, one Little Egret, two Cormorant, two Little Grebe, two Sardinian Warbler, one Grey Wagtail, four Chukar, one Kestrel, one Black-eared Wheatear, one Chiffchaff and one Grey Heron.

Foinikas
This site is an abandoned village on the edge of the Aspro Dam, it is best approached from Nata village; take the left hand track shown on the free 1:100,000 map, park in the orange groves and walk to the village. Note, last year the walk was not possible due to the higher river level. Birds seen here were two pairs of Blue Rock Thrush, one Little Owl, one Greater Spotted Cuckoo, two Kestrel and two Hoopoe. 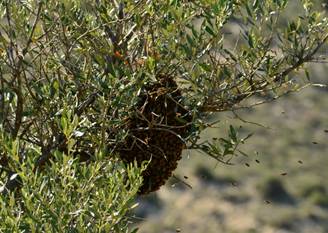 This coastal site is off the A6 motorway towards Limassol, take the Avdimou junction, follow the minor road to the beach and park. We walked to the left on paths up to where there is an army barracks so be careful with optics! Although not a prolific site we did see some interesting birds including a Black Kite, Marsh Harrier hunting over arable land being harassed by Jackdaws, two Swift and many Chukar on the cliff top. On our day here we did not encounter any other people probably due to its relatively remote location.

Baths of Aphrodite
This area is on the north coast and is best reached by using the E709 road which rises up from Coral Bay through Pegeia and continues at high level towards Polis. Keep an eye out on this road for raptors as a large unidentified one was seen on our outward journey and a Long-legged Buzzard was seen on our return journey. As this road is not too busy it is possible to stop the car if something is seen.  Birds seen in the Baths of Aphrodite area walking towards the Akamas Peninsular were: one Yellow-legged Gull, one Cyprus Wheatear, one Shag, two Sardinian Warbler, six Linnet, two Kestrel, seven Chukar, two Cretzchmar’s Bunting and a Yellowhammer.

This site is reached via Agios Georgios north of Coral Bay on the E701, take the road signposted Akamas Peninsular and park in the designated parking area at the entrance to the gorge. Birds seen her were: two Hoopoe, one Grey Wagtail, two Sardinian Warblers, two Chukar and one Kestrel. This area looks good for large raptors but none were seen.

Oroklini Lake
This superb site is around one and a half hours drive from Paphos passing Larnaca and turning left at junction 58 on the A3 motorway. Then take the first main road left again back under the motorway and the main site is on the right hand side. This site is now protected by high fencing and BirdLife Cyprus has done a superb job developing the site and in constructing a two storey hide and providing information boards for the visitor. Birds seen here were: six Greater Flamingo, three Spur-winged Plover, two Black-winged Stilt, two Northern Lapwing, two Little Grebe, two Ruff and six Shoveler.

Cape Greco
On our visit here we encountered six Cyprus Wheatear, one Blue Rock Thrush, two Chukar, two Kestrel and a superb male Pallid Harrier (a lifer identified from record pictures) flying in from the sea. 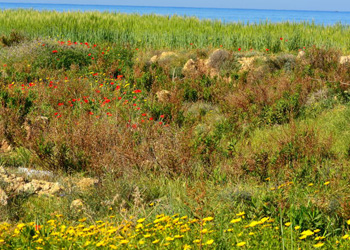 Pioneer Beach Hotel Headland
This site is next to the Pioneer Beach Hotel and was always worth a look after breakfast or before dinner. Birds seen included: twenty plus Northern Wheatear, four Isabelline Wheatear, six Black-winged Stilt, one Tawny Pipit, small groups of feldegg and flava race Yellow Wagtails, fifteen migrating Cormorant, ten Crested Lark (common throughout), six Stonechat, one Kingfisher, Slender-billed Gull (lifer), Little Egret, Black Frankolin (heard) and twenty Night Heron high on migration. These birds circled for 15 minutes looking for water and then flew off along the coast.

This site is one of the gems of Cyprus during migration periods and each day can bring something new. Birds seen on our visit included: four Woodlark, two Kestrel, one Black Redstart, six Night Heron, two Corn Bunting, ten Stonechat, one Red-throated Pipit, one Purple Heron, one Subalpine Warbler (lifer), White Wagtail (common throughout), four Northern Wheatear, one Sardinian Warbler and ten Barn Swallow. On the day of our visit others had seen a Saker Falcon earlier and previously a Wryneck had been seen. 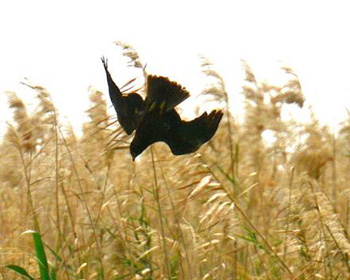 On this walk were seen one each of Cyprus, Fan Tailed and Sardinian Warbler along with one Blue Rock Thrush, three Yellow-legged Gull, one Whitethroat and one Black Francolin.

Geroskipou Beach River
Whereas last year this small river was full of water, this year it was dry and had been for some time so there were no waders/herons/crakes around; it was good for warblers however. Cetti’s Warbler were very abundant here along with Sardinian Warbler and Chiffchaff. A pair of Rüppell’s Warbler were seen along with a lone Redstart and a flyby Pied or Collared Flycatcher.

Bearing in mind that ours was primarily a walking holiday whilst carrying a camera on the back and small binoculars in the pocket for non “experts” we were pleased with the variety of species seen.  This year I have joined the Cyprus BirdLife organisation to support them in the major struggles they have to deal with in protecting bird life on the island.  If any readers are contemplating a similar trip to ours here are the advantages:

Many thanks to Colin Richardson (Cyprus Bird Recorder) for his help (again!).