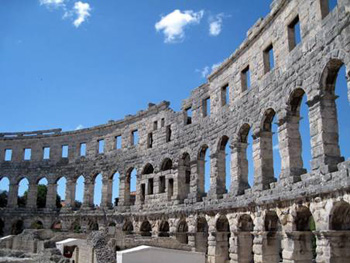 This was our first trip to the Istrian Peninsular in Croatia for forty five years, back then it was Yugoslavia with a dour, suppressed feel. Things have changed completely now and it can be recommended for a wide range of different types of holiday. Our aim was to have a culture, walking and wildlife holiday and it ticked all these boxes. The base for our trip was the town of Rovinj on the Istrian coast and our hotel was the Eden (very good) which was about ten minutes walk to the picturesque harbour and five minutes walk to a wooded nature reserve and adjacent scrub/meadow/woods. The trip was booked through Thomsons and cost about £850 each including flights, transfers and half board; we considered this to be very good value. Weather on the trip was generally good with no rain in the daytime and temperatures generally in the region of 60 to 65°F. A point to note that only on two days was it warm enough to sit by the pool or on the pebble beach, so those looking for a poolside holiday would be advised to come later in the year. 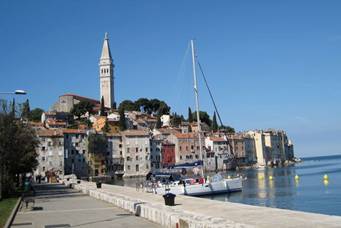 Rovinj is situated on the coast between Pula and Porec, both world heritage sites; we spent three days in Pula and one in Porec. Pula is easily reached by a frequent bus service; Porec has few buses from Rovinj but can be reached by boat or fairly low cost organised trip. Rovinj itself is a very peasant town with the “old” quarter dating from the 17th Century having a very Italian feel, not surprising as it was ruled from Venice at this time. The coast here is rocky with inlets so there is not the over-development seen in places such as Cyprus, Spain etc. The countryside is very unspoilt with vast areas of dense woodland, flower meadows and small wildlife friendly farms. From our hotel we could have several walks in beautiful countryside with only a few cyclists seen in the day.

INFORMATION and GETTING ABOUT 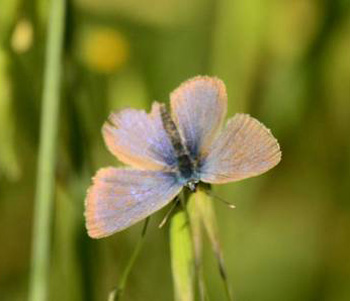 Prior to the trip the only bird/wildlife information I could find was general information covering the whole of Croatia, as it is perhaps not a prime birding location no trip reports of the area were found except the odd professional tour which travelled into Slovenia and covered a very wide area. In common with many ex-communist countries getting local information on walking & buses etc can be a bit problematic, so here are a couple of tips to help visitors: Buses – if getting a bus to Pula (every 30 minutes) there are three bus companies on the route, so only get a single fare from the ticket office located near the harbour (see town map) as a return ticket might see you have to wait for your operator’s bus to leave Pula. Walking – when visiting the Tourist Information office in the harbour ask for walking/cycling maps of the area and when using the maps for walking/cycling be aware that signage on the tracks only appears in the direction of the arrows on the map, if you are walking in the opposite direction it can appear there are no signs. We did not feel the need/requirement to hire a car as the countryside/coast was readily accessible on foot. Bike hire was very common here and cost around £8 per day. 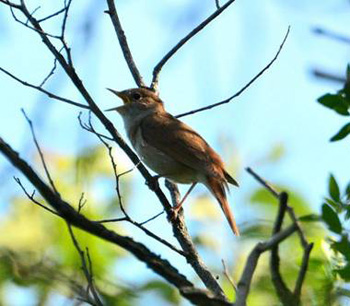 My local patch for a couple of hours each evening before dinner was located at:– turn right outside of hotel, left at communal outside sports centre (200m), then turn right onto a small path towards some woods (200m), this area had a variety of habitats, particularly good for warblers. Seen here were literally dozens of Nightingale, also Lesser Whitethroat, Subalpine Warbler, Blackcap, Cirl Bunting, Turtle Dove, Red-backed Shrike, Whinchat, flyover Grey-headed Woodpecker, Spotted Flycatcher, a very confiding Pheasant and a probable flyover Hobby. Note:- The Red-backed Shrikes appeared en masse on two occasions after overnight rain and at these times there would be a bird on every other bush. Outside of these occasions they were very scarce here. Next to the hotel was an area designated as a local nature reserve, which was mainly a pine forest with some glades and deciduous trees. Birds seen here were Serin, many Nightingale, Blackcap, Yellow-legged Gull, White Wagtail and Jay. A Goshawk was heard in the hotel grounds but not visually located. The surprising thing about this area was that in the whole time we were there no Woodpeckers, Nuthatches or Treecreepers were seen or heard in spite of it appearing prime habitat. Perhaps the very high density of Jays has an impact? 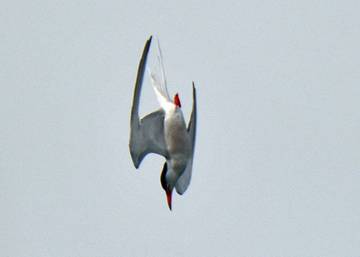 A very large number of Yellow–legged Gulls were here, probably due to the fish processing plant, only one different type of gull was seen and this was a poor condition Black-headed. The Shags in the bay were very confiding; one migrating Common Tern was seen along with several Northern Wheatear. The only Green Woodpecker seen was one which was disturbed on the kerb next to the beach whilst foraging for ants.

Bird Walks to the North of Rovinj

Following the Rovinj Istrian  Bike/Walking map through Rovinj turn right off the main road at signed bike path 201/2, this is a minor road eventually turning into a gravel track. After about half a mile, the track splits. Take the right hand road 201 and follow this through some lovely varied countryside which was our best birding site of the holiday. Birds seen along this route were:- Subalpine Warbler, Hoopoe, Cirl Bunting, Red-backed Shrike, Woodchat Shrike, Steppe Buzzard (which was eventually mobbed by a Magpie), Long-legged Buzzard, Hawfinch (lifer), Jay (very common), one Mistle Thrush (the only thrush of any kind seen), Spotted Flycatcher, Nightingale (very common), Golden Oriole and a Goshawk was heard.  The most prolific area of the walk was around the Riding Centre where most of these birds were seen. 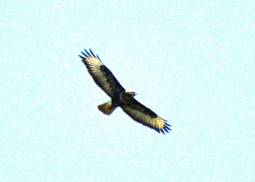 This was the only dedicated bird reserve in the area and lies to the south east of Rovinj on bike path 203 and consists of a large shallow reed filled lake with an elevated hide and lots of wood/shrubs/glade habitat around. We walked to this reserve from our hotel but be warned it’s too far! Better to hire a bike or drive close by and walk the rest of the way. Birds seen here were Golden Oriole, Sardinian Warbler, Blackcap, Nightingale, Little Grebe, Little Egret with young, Mallard, Coot and a family group of three Kestrels, the only ones seen on our trip.

Come out of the Bus Station on the opposite side to the direction of the Amphitheatre and you will come to a main road and a hill opposite, covered in pine trees. Walk up the hill and on old fort and cemetery can be found alongside some nice woods and glades. Surprisingly here, 200m from the city centre were Hoopoe, Nightingale, Blackcap and Northern Wheatear.

Whilst our plane was slowly taxiing down the runway to return home I noticed that the airport grass had just been cut, lo and behold a group of twelve Red-footed Falcon were hawking insects, a nice way to round off the holiday! 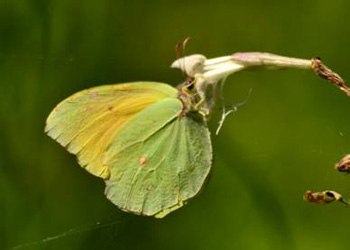 The Istrian Peninsular is a bird rich area but did throw up a few questions:- Jays – These were very common and confiding in every habitat, could this be why other species i.e. pipits and woodpeckers are absent? Pipits – Only one pipit was seen during our trip (unfortunately too brief for identification) yet the habitat appeared ideally suited. Cuckoo – No cuckoos were heard during our visit yet the mixed countryside appeared to be ideal, perhaps the lack of pipits for nesting or high density of Jays? Woodpeckers – In the prime wooded areas no woodpeckers were seen, nor were there any signs of woodpecker activity. Nightingales – These were amazingly common in every area and habitat; in the scrub near the hotel from one position I could hear six singing birds! 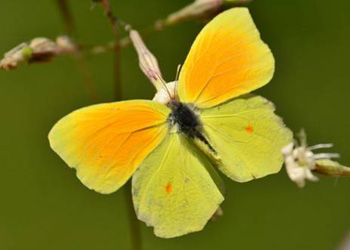 Story behind the Cleopatra pic; these fabulous butterflies always land with their wings closed as in the top shot; as they were quite confiding my wife got some of their food plant and held it in front of her and I fired away on burst and finished up with one nice photo out of many taken. The picture has not been cropped.

Red Squirrels were seen occasionally in the hotel grounds, as you can see from the pictures they are very dark animals. Signs of Wild Boar activity were seen in the pine woods next to the hotel. Wall Lizards were quite common and a Dalmation Algyroides was seen in the ruins of a church; both are pictured below.

We had a really good holiday combining some fabulous culture/history, beautiful walks and some interesting birds (48 species) and wildlife. Rovinj is probably not the place for a dedicated birding holiday but for a family walking & biking holiday, incorporating a few days birding, it is ideal.