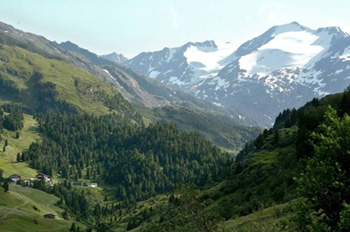 This trip to Obergurgl at this time of the year was booked because the village is around 2000 metres above sea level and would be much cooler than lower resorts, which at this time of year are too hot for us. Obergurgl is a ski resort in winter and in summer (late June – September) opens as a walking/hiking centre. The holiday was booked through Thomsons about a month before departure and as a result the price was reduced to around £800 each for flights/transfers and half board at the Hotel Lohmann which included free wine/beer etc with the evening meal. Included in the price from the hotel was the Otztal Premium Card which gave free access to all the cable cars in the whole valley plus all buses, swimming pools and museums on the area.

We used this card every day, if purchased independently it would have cost 91 euros. The Hotel Lohmann was really excellent; it has only forty bedrooms but still had a good range of quality food in the buffet style restaurant. Staff were very pleasant and helpful and our room was about twice as big as any other hotel room we have been in. Pre-reading was not possible as I could find no trip reports or detailed information on the fauna of the region. In reality this would not be an area for a specific birding holiday but as ours was primarily a walking holiday it was fine. 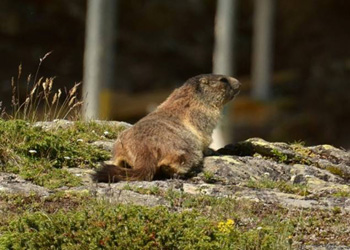 If considering visiting Obergurgl in July you will need to be aware of clothes required for different times of the day and altitudes. For instance on our first two nights there was a hard frost overnight and the top of the Obergurgl gondola (2670m) was quite cold (although sunny) in the day. By the end of our trip the temperature in the village was around 70°C and the top of the gondola around 65°C.  During our trip we had no rain during the day although it did precipitate on occasions in the late afternoon/evening.

The bus terminal in Obergurgl is about five minutes walk from the hotel and the valley buses to other villages are every half hour at peak times. With the Otztal card you can also catch a bus over the border into Italy (Moos) on one of the highest roads in Europe, a really memorable 80 minute ride. There are four gondolas within easy reach, the Obergurgl one is near the bus station, the next one down the valley is the Hochgurgl, this can be reached by bus (10 minutes) or a very pleasant walk through the valley (90 minutes). The other two are in Solden, about 20 minutes by bus, one if which reaches 3774 metres and is well worth it for the views. 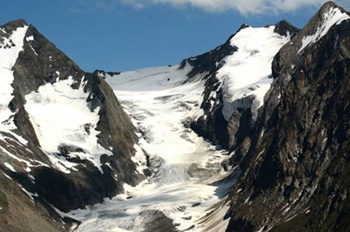 This area was the most productive in terms of birds, on the top plateau within thirty minutes we had a nice Snowfinch (lifer) come fairly close whilst we were having a break. This pattern of birds coming to us whilst we were seated was repeated several times. At least one pair of Northern Wheatears was nesting here and a pair of displaying Ravens flew close over our heads.

As we descended down the right hand side of the mountain (looking out of the gondola station) a pair of Alpine Accentors (lifer) was seen. These birds were very wary and not as confiding as I understand they can be in winter around mountain cafes. Further down the mountains Water Pipits showed themselves, always keeping an eye on their human visitors! Not far from the middle gondola station and at the top of the natural tree line we stopped for a break by a ravine with a mountain stream running through. After about ten minutes a pair of Nutcrackers came along the top of ravine and gave good views atop a nearby bush. A few minutes later a family of Coal Tits came through the same trees; this was followed by a Marmot who decided to venture out of a hole on the other side of the ravine. 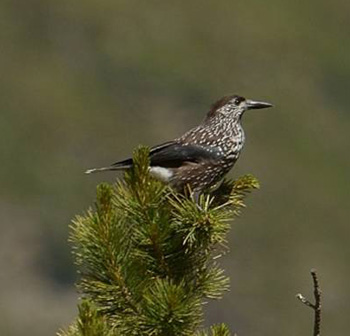 For information the left hand descent down the mountain had no birds but was very good for butterflies including a fabulous Camberwell Beauty that I did not manage to photograph. At the bottom as you descend is a nature park and a family of Willow Tits were seen here.

The walk starts in the field behind the Lohmann hotel, crosses the river and continues downstream to the bottom station of the Hochgurgl gondola (3080m). This walk is very picturesque, about two miles long, not too challenging and held a few interesting birds. In the first field behind the hotel, where the meadow had just been cut, were nesting Fieldfares, plus Black Redstarts, House Sparrows and White Wagtails enjoying the insect fest. Further along the track the meadow had again just been cut I noticed some small birds in the distance using the wire fence posts to pick off insects. I gradually worked a bit closer and managed to spot Whinchat, Lesser Redpoll, Linnet, Black Redstart, White Wagtail and Northern Wheatear all in one small area.

Further down the track on one of our (frequent!) breaks there was a conveniently based seat and a pair of Siskin was nesting in the bushes behind, oblivious to our presence. Just before the track crosses the river again there was a rainwater puddle that was being used by Crag Martins to build their nests. These were quite common in all (lower) areas along with Sand Martins and Swifts. 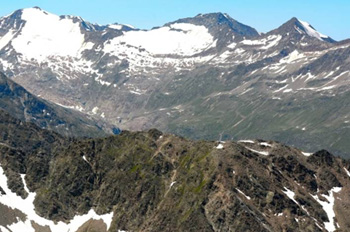 Golden Eagles:- According to the local nature pamphlets these are common and likely to be seen – not so! After scanning the skies every day for 10 days without success on our last morning on this walk two dots in the sky were spotted at great distance and only after maximum enlargement on my APC camera with 400mm lens could I confirm the identity of these Golden Eagles. One of the receptionists in the hotel saw one much closer than us whilst atop the Hochgurgl mountain. Marmots were seen along this walk along with many butterfly species. The river here was a raging torrent and a very cloudy grey colour due to it being glacier meltwater.

Solden is the next village down the valley from Obergurgl, about twenty minutes on the bus. The gondola (3774m) passes over the road and has a bus stop right outside the entrance, it has two sections and the top one is by four seater chairlift. The top has fabulous views and was very cold, no birds were seen here. At the mid-section of the gondola (2174m) ride you can exit turn left and this is the area where a few birds can be found. Water Pipits were common here and a Snowfinch was seen along with Fieldfares and Ravens. From the bus ride to Solden a Buzzard was seen, the only one of our trip. 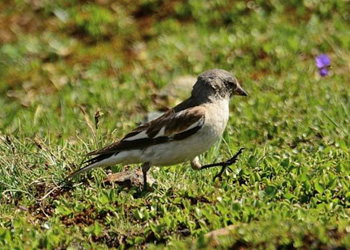 No Alpine Choughs were seen around any of the mountain tops, nor were Ring Ouzel which I might have expected on the high slopes. No Woodpeckers were seen nor signs located, we were probably too high, the same might apply to Crossbills. Dippers were absent due to most of the streams/rivers being glacier run-off.

According to the local nature pamphlet Wallcreepers occur in the area on the cliff faces of the mountains and in the ravines; unfortunately there was no detailed information on when or where they might be found. I did come across some scat on a path that I later identified to probably be Wildcat, but to see these you would have to make a special effort and have local knowledge. I was hoping to see Chamois and Ibex but along with others was disappointed; this is probably due to too many people and no detailed info on possible sites.

We have been to Austria before and were expecting some interesting butterflies but were totally surprised by the large number of species seen in the various habitats and if this was your main interest they would warrant a visit on their own right. One interesting point of note is that early on during our visit there were hard frosts overnight in Obergurgl and at the top of the mountain temperatures fell well below freezing, yet during the day it was alive with butterflies. Some of the species seen are pictured below. 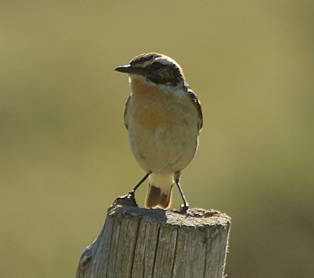 Fairly obviously Obergurgl would not be the ideal location to come for a week’s intensive birding, but if you, like us you want to combine a walking holiday in high summer without excessive heat in fabulous surroundings whilst enjoying some rare birds and butterflies then you will not be disappointed. One point not mentioned above is that on the walks from the gondolas you will not be alone! There were never any queues for the gondolas however which were well utilized by visitors. We enjoyed our holiday so much that my wife (a non-birder) has said she would like to come at the same time next year including the hotel!