I took a short city break with my family to Madrid and booked Luis Sitges once more as my guide in this region of Spain. Unfortunately I picked a very bad weekend with regards to the weather, arriving in driving rain, with cold winds coming in from the north. In fact there were blizzard conditions to the north of the city, with several areas on a weather alert. This poor weather lingered until Monday afternoon, when Luis and I went for a walk along a riverine forest area in the north-east of Madrid.

We went for an afternoon walk along the Rio Jarama in the north-east of the city, an area Luis knew quite well. The main target for me here was Spanish Sparrow as I had missed them on an earlier trip to Madrid. Luis had seen them there recently and sure enough we quickly found them in the thistle plants along the edge of the track. A few minutes later a male Goshawk flew out if the trees and glided low across the ground and disappeared, not to be seen again. Continuing along the track we observed Siskin, Tree Sparrow, Greenfinch, Chaffinch, Black Redstart, Goldfinch, Lapwing, Wood Pigeon, Collared Dove, Linnet, 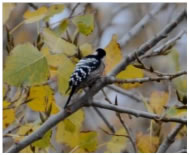 Grey Heron, Mallard, Green Sandpiper, White Wagtail, Robin, Kingfisher, Chiffchaff and Grey Wagtail. Overhead a flock of Common Cranes on migration, passed over, as well as several White Storks. Three Red Kites were seen, very common in the area in winter, in addition to a single female Kestrel which was sitting on a post. We returned along the river when we suddenly spotted a small woodpecker! It was a Lesser Spotted Woodpecker, uncommon here with a few in winter only. This was followed by a single Green Woodpecker and two Great Spotted Woodpeckers. All three woodpeckers within an hour, amazing! Finally a Hoopoe flew across the path as we headed back to our vehicle.

An early start, we left Madrid at 07:00 and headed south for 200km, along the way we saw a Great White Egret and several Cattle Egrets as well as Common Coot and Moorhen and sitting on the telegraph wires, were several Great Grey Shrikes. We finally reached our first stop, an area of farmland and forest called the Tieltar Valley.

A fantastic birding area with large numbers of birds present, driving slowly along one of the roads that criss-cross the area, we picked up Southern Grey Shrike [4], Spanish Imperial Eagle [1], Woodlarks [50+], Chaffinch, Common Buzzard, Skylarks, Water Pipits, Tree Sparrows, Jackdaw, Green Woodpecker, Grey Heron, Little Owl [1], Stonechat, Cattle Egret and Little Egret. We parked our vehicle at the edge of a small village and walked along a track, within a few moments we saw our only Black-shouldered Kite for the briefest of moments, the only sighting of the bird despite an extensive search. However we did connect with several Azure-winged Magpies, another target species for me, with some cracking views. Overhead we could see and hear several hundred Common Cranes, some feeding in the area, others high up in the air, migrating further south.

Time was getting on, so we decided to head to our next target area Montalban Castle, however we were not to know the area had been taken over by a Spanish TV crew for their popular historical drama Isabel. So just a few birds were seen, Crested Larks, Song Thrush, Meadow Pipit, Sparrowhawk and Spanish Imperial Eagle. Several target birds for this area were missed, Eagle Owl, Golden Eagle and Bonelli’s Eagle, birds that Luis had seen here on earlier trips, but that’s birding, the triumph of hope over reality when it comes to the more difficult species!

After lunch we drove to our final destination, a superb birding area of rolling farmland near Torrijos, called La Sagra. Luis had scouted the area a few days earlier and found several large flocks of our target birds, so we were confident of success but in birding you just never know! However it wasn’t long before we found our first target, Great Bustard: we found several flocks of 10-20 birds and had some fantastic views of this iconic bird of the Spanish Steppe. My next target was a little harder but eventually we found a small flock of Little Bustard. Among the little Bustards we noticed some other birds; they were Pin-tailed Sandgrouse, which obligingly flew over our heads, resulting in some stunning views. The last steppe species, Luis thought would be difficult because on recent trips to this area he had only seen one or two small family parties, 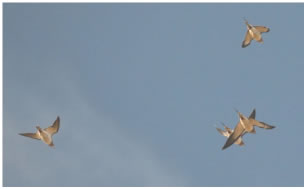 but after searching for over an hour we eventually found five Black-bellied Sandgrouse in a ploughed field. Finding all four steppe species was fantastic!

We finished birding just as dusk arrived and what a day we had! Luis once again proved invaluable in his knowledge of the birds and more particularly the best sites to observe them. He was as usual wonderful company to be with, which added greatly to the birding experience, always helpful and happy to help you in identifying the birds. I have no hesitation in recommending him to other birders.